Ever since I was in Israel two years ago, it has been my dream to take a small group on an affordable experience in this Biblical Land.  This week, it was able to happen!  Susannah Bueckert (a YFBC intern), John and Sarah Neufeld and Holly Epp joined me on a pilgrimage to the land Jesus walked on.  Michael Unger (who is volunteering in Israel between working at camp) met us at the airport and is joining us for four days of adventure!

Thursday was an amazing day.  We started at Caesarea, the town where Cornelius the first gentile convert came from.  The ruins there are of the don't miss variety.  You can see the group relaxing in a Byzantine Governor's house (in a 1600 year old hot tub no less) and sitting in the stands of a 2000 year old hippodrome (used for Track & Field, Horse Races and Gladiator games - where Christians and Jews were killed). 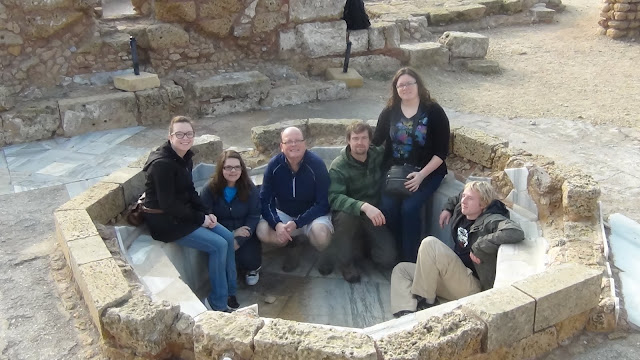 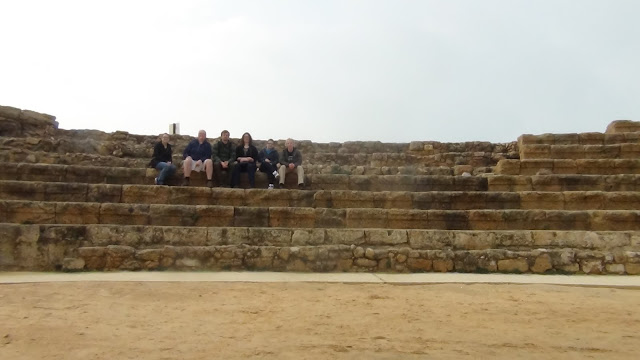 Herod had a castle at this Mediterranean Sea Port.  Paul met with Governor Felix here to be sent to Rome.  And Peter had an amazing experience seeing the Gospel message revealed for more than Jews, baptizing the first Gentile convert in the waters we touched (with both hands and feet!).  What a place to be!

We spent time reading these New Testament stories and thanking God for bringing us into his Kingdom through missionaries like Paul and early converts like Cornelius.  We prayed for persecuted Christians and the people in the this land.

Next was Mount Carmel to the monastery built by the Carmelites on the spot where Elijah called down fire from Heaven to show the wavering nation their true God.  Holly led us through a Bible Study on the passage asking us - What ways do we sway from God? Do we desire the supernatural? Do we expect it? Do we sometimes feel there is no answer from God and cry out, dance around, and behave in a way to get a pity answer?  We had communion together at the mount that oversees the Jezreel Valley - how powerful!  Here is a picture of the group by the statue of Elijah. 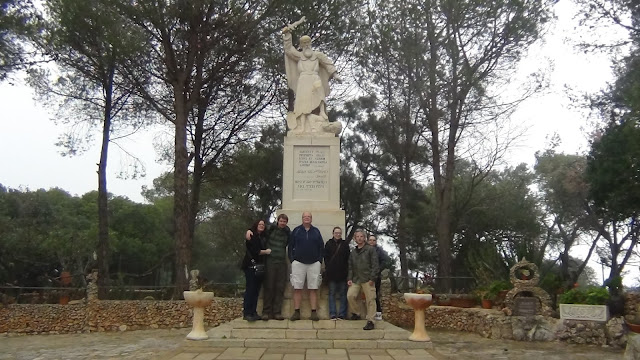 Next of course was Armageddon where we met a bunch of Mennonite Brethren Pastors!  According to Revelation, Megiddo is the site of a gathering of armies for a battle during the end times.  It is also an ancient city that has structures from 5000 years ago.  Many ruins were originally built by King Solomon and King Ahab.  A highlight for everyone but Holly was descending down 180 steps into a water system built to bring the life-giving resource into the centre of the city.  We then walked through a tunnel built by King Ahab that was 100 meters long.  It was cool!

We finished the day back in Tiberius dining on schnitzels, sushi, pasta, shawarma, pizza and more.  A competitive game of Phase 10 ended a rewarding day!
Posted by Mark Wurtz at 21:33